Thomas DiSalvo (JT) is honored with being the only actor to have been in every PRT show. Previous PRT roles: Steve in Burst, Thurston and others in A Tuna Christmas, Jim in The Glass Menagerie, Jake Albright in A Christmas Carol, 1933, Lesgate in Dial M For Murder, Snetsky in Fools, Willum in The Nerd, Giles in The Mousetrap, George in On the Lam, The Mad Hatter and Tweedledum in Alice in Wonderland, Franz in Frankenstein, and Richard in The Ghost Train. Other Credits include: The Nutcracker with The National Ballet, Coppélia with The National Ballet and Greater Niagara Ballet, Suicide Apparition at the NYC 15 Minute Play Festival, and Sherlock Holmes at Strathmore Mansion. Thomas appeared in the feature film Tournament, now available on Amazon.com. Thomas is a proud graduate of the Catholic University of America.

Emberlein DiSalvo (Virgil) has been a member of Parlor Room Theater since its beginning. Her previous acting credits with PRT were Alice in Wonderland (The Lory/Card) and Doctors Orders (Dot). Outside of Parlor Room, she was most recently seen in Ad Nauseum (Mrs. Spurlock) and The Importance of Being Earnest (Miss Prism) at Catholic University.

Amy Horan (Mary) has performed in four plays with Parlor Room Theater, and made her playwriting debut at PRT with last year’s Burst. Previous PRT credits include The Glass Menagerie (Laura), Dial M for Murder (Margot Wendice), A Christmas Carol: 1933 (Mae Barker), and The Nerd (Tansy McGinnis). DC credits include Emma in Static with the Source Theatre Festival, Forum Theatre’s (re)acts: How we Cope, and understudying for Studio Theatre in Animal (Rachel), Terminus (B) and Mary-Kate Olsen is in Love (Grace). She received a BA in Drama from the Catholic University of America and has trained for two years with the Studio Theatre Acting Conservatory.

Mo O’Rourke (Sage) is pleased to be working with Parlor Room Theater for the second time after last year’s Burst. Some of her recent credits include: Sioux Falls (Tenth Muse), Much Ado About Nothing (NextStop Theatre), The Real World: Kabul (Captial Fringe Festival), The Long Way Around (Highwood Theater), Good Good Trouble on Bad Bad Island (NextStop Theatre), and Blithe Spirit (1st Stage). She holds a BA in Drama from The Catholic University of America. 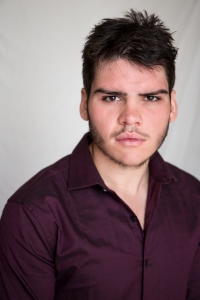 Robert Pike (Derren) is ecstatic to make his Parlor Room Theater return after appearing in Burst, The Glass Menagerie and Dial M for Murder as well as sound designing the 2014 production of A Christmas Carol, 1933. DC acting credits: Neverwhere (u/s perf), A Bid to Save the World, Truth and Beauty Bombs: a softer world, She Kills Monsters (Rorschach Theatre) The Wizard of Oz, Much Ado About Nothing, Crimes of the Heart (NextStop Theatre) Henry V, Chalk (We Happy Few) Coriolanus (Brave Spirits Theatre) A Midsummer Night’s Dream (WSC Avant Bard) and appearing in the 2015 Source Festival’s Media and Mistakes Ten Minute Plays. Robert is a company member at Rorschach Theatre and We Happy Few and a proud graduate of the Catholic University of America. Pikerf.weebly.com

Back to Ghost Light.

Frank DiSalvo Jr. (Playwright, Director) is a writer, Helen Hayes Award nominated sound designer, and founder of Parlor Room Theater. He has acted, directed, or designed (or a combination of all three) every PRT show since 2006. His full length plays Doctor’s Orders and On the Lam premiered at Parlor Room Theater. His short plays have appeared in the Kennedy Center Page-to-Stage Festival, the NYC 15 Minute Play Festival, the Lakeshore Players 10 Minute Festival, and the North Park Playwrights Festival.

Julie Cray Leong (Costume Design) is thrilled to be back with Parlor Room Theater. Recent designs include: Annie Jump and the Library of Heaven (Rorschach Theatre), Beep Beep (Arts on the Horizon), The Laramie Project (CUA Drama), Pericles (STC’s Academy for Classical Acting), Julius Caesar (STC’s Academy for Classical Acting), and Burst (Parlor Room Theater). Other designs include Imogen (Pointless Theatre Co), Nutt and Bolt (Arts on the Horizon), Mack, Beth (Keegan Theatre) and Catch Me If You Can (NextStop). Upcoming Designs include The Oldest Boy (Spooky Action Theatre), Lady M (The Welders) and War Boys (Ally Theater Company). BA Drama – The Catholic University of America. She sends her love to her husband and her daughter for their continuous support. For more information, visit: www.JulieCrayCostumes.com

Ember DiSalvo (Set Design) has designed for every Parlor Room Theater production since 2006. Favorites include set designs for The Ghost Train, The Mousetrap, Dial M for Murder, and A Tuna Christmas. Her design for The Mousetrap was ranked by DC Metro Theater Arts as one of the Best Set Designs of 2013.

Dean Leong (Lighting Design) is a local designer from the Washington DC area. Recent design credits include: Scenic: Tartuffe with Perisphere Theatre Co. Lighting Credits include: The Girl In The Red Corner with The Welders (Asst. Lighting). Our Town, The Importance of Being Earnest with CUA Drama Dept. A Tuna Christmas and BURST with Parlor Room Theater Company. He is currently the Assistant Technical Director and Master Electrician for The Benjamin T. Rome School of Music, Drama and Art. Upcoming designs include The Wolves for both lighting and scenery. He would like to thank his wife and daughter for being amazing.

Back to Ghost Light.